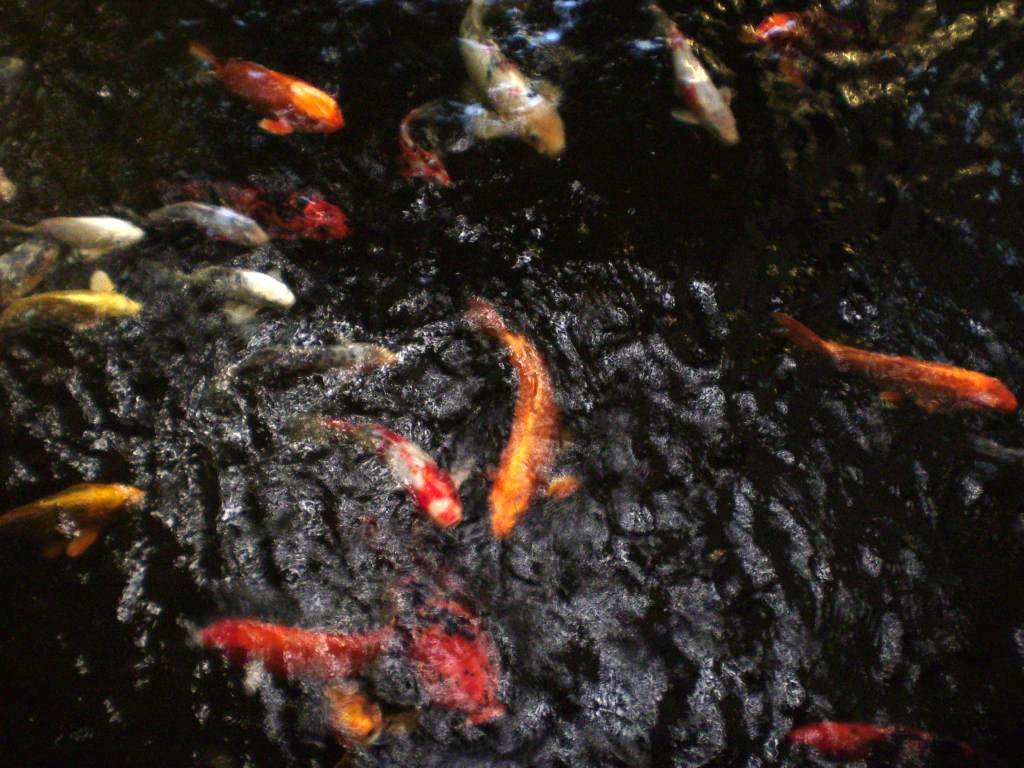 Koi fishes from Houston... is everything supersized down there? (Photo by Mr. Faun)

Little sum up for those who missed what happened previously on Euforilla.
“Musa’s box” is a weekly post intended as a real box where you keep the “everything nice” happened and lived during the past week. It may be huge things or small things, it doesn’t matter, what matters is that these things have a positive value to you, that they make you feel good just by thinking of them and that they can draw a smile on your face each time.
The ultimate goal of said box is, mainly in the long run, to increase your dose of positive thinking, because remembering that there is always one good reason a day to stay cheerfull is good for your health.
One of the outcomes I like most, though, is that after a few lists you start realizing and enjoying nice things while they’re happening, and you already start to feel grateful

° A quiet friday night, on the couch, watching a new tv serie
° A super busy saturday!
° Tribal Fusion and Tabla stage: three hours in the morning, three in the afternoon, plenty of sweat, tinkering coins anywhere, muscles (did I have all those little muscles hidden in my body? Did I???) were sore for days… but most of all it has been an all-women moment, connected like we knew eachother, everyone with her shape, her colour and her fluidity (or not, in my case XD)… it also was a powerful emotion to see all these women moving in sincronicity and being part of it… shivers!
° High school reunion dinner: we were very very few, but seeing known faces after seven years and finding out that there aren’t embarassed silences is really enjoyable. It’s also enjoyable to see that we’re all (our class was almost entirely girls) grown happy and trying to do our best. One’s pregnant… it may make you feel a little old, but in a gentle way. (Am I too sentimental lately?). And then chatting about everything, missing ones too :P. Going for a walk, for an ice cream or a beer. And did I mention the wonderful dinner at the Lebanese restaurant? Sooner or later I’ll HAVE to make at home hoummus and falafel!
° Saying goodby to MrFaun who left for Houston (we have a problem! Come ON! Don’t say you never wished you could say that to!!!)
° Going visit a new friend, her furry little ones (one hidden under a chair, the other one offered me “the back cheeks” to rub and cuddle), her colourful home and talk about fabrics, costumes, makeups, pictures and exquisitely goth illustrations
° Tuna sauce
° Finding out that I’m surprisingly mature, above provocation, with an enviable (yes, I say so myself) self esteem and control!
° Gala Darling website… it has been ages since my last visit, after she took down comments and link to other people’s blog and she started to post only about super high end fashion things I didn’t like it that much anymore, but I checked it out lately and I liked it again

And I can’t forget it’s from her Things I Love Thursday that I took my Musa’s Box (I still ignore where she took it, Steve Pavlina? The sound of music? Who cares, it’s a nice thing and it deserve to be spread!)
° Rewatch “The Secret Garden” 😀
° Mr Faun’s jet lag that allows us to chat ahead of time!
° A sense of “missing” that it’s almost a physical presence
° going out from the office for a while, to snap pictures in the street, holding a giant banner, making a fool of myself and don’t giving a dang!
° update a little my blogroll, it was about time!
° Dropbox: I can see pictures from Houston (almost) live, without waiting for Mr Faun to download, upload (with cuts and compression) and me downloading them again… thank you little blue thingy, thank you!
° Morning croissants at work, just after thinking “I’d really like a croissant now!”
° putting a little more effort in the morning to dress up: a fancier shirt, matching earrings, spending a little more time to do my hair up differently, a little makeup, a little perfume… feels like a special day

° green, non-sticky, ceramic pans… and all those house-needs you can “buy” from supermaket collections & co!!!
° pasta with sauce. When you’re hungry it’s the end of the world
° a vague, old, feeling of “power”
° Mythological creatures, they’re mythological even when they are 7hours time table apart!!!