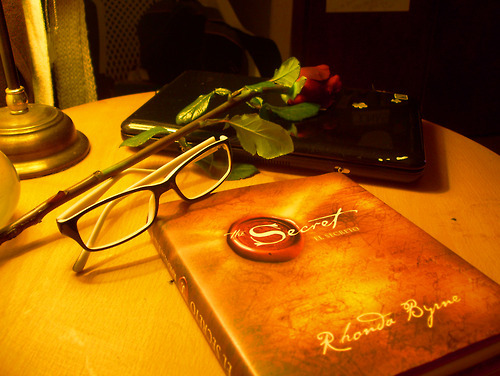 Like I said when I wrote about self help books, I want to give you a more detailed review for this “editorial success”: “The Secret” by Rhonda Byrne.

Save your money.
I mean it… I hope it doesn’t sound like a bad suggestion, but if you’re anything good with google and youtube… 😉

Anyway. I could have written a paper for my Epistemology professor, at university, when he was teaching us about fallacies. This book is filled to the brim with them. For those who have absolutely no clue: a fallacy is something used in logic and reasonments, to get some accountability, something that shifts your attention from the topic you’re discussing to focus on something else that seems related (but it’s not).
For example the ipse dixit: I want to affirm that chocolate is good, so I quote a very famous poet who wrote an entire poem about it. And other fallacies use scientific researches, common sense knowleges, respect for some famous people…

This book calls in Leonardo da Vinci, Einstein, Ghandi and simple names along these ones, it keeps repeating, in different ways, always the same thing (it sounds almost like a brainwash), and it’s all dolled up in a very authoritative and charming way.

You won’t find anything you can’t find also online, for free: imagining yourself in some way to get to a goal, behaving and acting consequentially, keep positive, believing in it. They stress the action bit a little, but in the end there’s just this taste of “if you keep on believing, some day your wish will come true”… that’s it, thank you Cinderella.

Again, they point a lot on making better money. I understand that in a moment of global economical crisis it’s pretty fascinating…

But let’s face it, it’s they who have found the secret on how to make money on something: make a lot of noise about something obvious, wrap it well in pretty paper, call it with a big name, say it’s something easy and something that will make you get big money, say it’s something everybody knows but missing a piece to work perfectly, say you’ve found this piece, call in big names (they may get a fraction of the gain? or at least some prestige in return?) and voilà!

Though, to make it work, you have to believe…
(I don’t even want to deal with: did a mother from Niger wanted her son starve to death? Did a girl from some parts of China wanted to be disowned? Did a girl from Paris wanted to be raped? If you want some less tragic examples: two people have a job interview for the same job, they both know the secret, but of course there’s only one position available… you can draw your own conclusion!).

PS
There is something good in this book, as in every self help book, they’re so self-assured that when you read you’re actually touched by that good feeling, that sense of trust and chance… which is not bad 😉 Plus if you’ve never read any self-help book this might be a good start: quite cheesy, but presents a little bit of everything.
I’m not saying that the “law of attraction” is totally untrue or what… I’m open to the chance it may work, I think that it’s our thoughts, somehow, shape the reality in which we live and I believe that the human mind has an incredible potential… but in the end this book is but a marketing success (plus they’re putting out “The Power” now, and you can already find countless similar books, sequels and so on… but if the secret works, it only takes one book, isn’t it?).