This year, don’t ask me why, I absolutely could not answer you, I wouldn’t know what to say, I’m feeling Carnival, and this hadn’t happened in at least 20 years (and it’s not an hyperbolic number).

It means I’m waiting for it, I’m willing to dress up, go around to see “the masks”, toss confetti, take pictures and bake and eat the sweets my grandma used to do when we were little.
Namely the “fias” (large and flat pancakes) and the “sfarso” (little round, soft and puffy fried thingies). 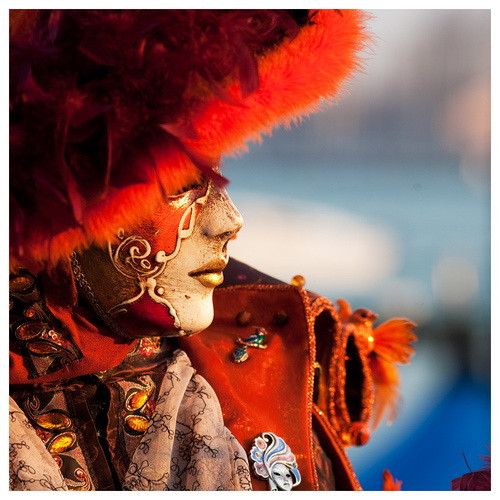 So I’m already thinking about how to organize it all… most of all, I’ll confess, about the costume. Nowadays you have all kinds of costumes, but originally carnival was a moment were everyone could be anyone, peasants mix up with royalties, play (harmless, thank you) pranks with eachother, and laugh at it all.
I think that what I’m feeling most is this lighthearted mood and all the colour, I feel like I want to subverse the natural order of things, be chaotic and then enjoy the order and tranquillity…

Ater all it would be very easy to get one of those cheap white “Venice” masks, and then go wild on it with paints, buttons, ribbons, beads and glitter, then open up my fabric drawers and pull out some random coloured scrap, get out and have fun, come back and make the house smell of frying oil to enjoy some puffs with friends.

Basically, Carnival is what’s left from all those ancient winter festivals, done to scare away the end of the world (yeah…), because those days of darkness were considered “suspended” from the natural order of the world (after all the old roman calendar only had ten months and the period between december and january was a time of “no time”), the chaos came back to rule and reign over the earth, so people subverted the usual order of things (and of societal standards), dressed up in colours, ate whatever, played music and loud things, shot fire and fireworks, to call back order and fertility for the new year, there was also the habit of making a straw puppet, name it the King of Carnival, sentence him publicly to death, read his testament and then execute him, so that the bad things of the past year could die, and the good things for the new year were wished and called upon. It’s what is left from Saturnalia and Bacchanalia and Lupercalia

And here Wikipedia tells you best.

Open letters
Monday Musings
June Photo a Day Challenge - 1 Morning
How to get back from a slump
My big fat italian-spanish wedding 8: the wedding favors