We had a wedding with very little DIY.
I would have done EVERYTHING myself… but at some point, when your event is sponsored, well, you have to give the sponsors something back 😛

Pictures
None of us can have coffee without plastering its picture all over the internet. We knew all our guests would have had their phones ready.
We simply asked some cousins, who have kickass reflex cameras, to come with fully loaded batteries and empty memory cards, then go ahead and take as many pictures as they liked.
Then we collected all the pictures made by our guests. We have some serious works of art taken with simple smartphones, therefore we have no “regrets” whatsoever for not having had a random person asking us to pose every five minutes!
(Plus, no, we’re not keen on going around town snapping romantic pictures of ourselves with the river in the background)

Flowers
The ceremony, at the district, was about 15 minutes, we would have had to set the scene and unmake it just before and just after.
Why rushing so much for a few minutes of function??? Why spend money on cut flowers that, at best, will live on for a few days, to show them off for a few minutes of function???
The room, anyway, was small and cozy and, to my taste, pretty enough already… (it was an old church, it had stucco and frescos on the ceiling, paving stones and an old stone altar, some plants and big red velvet chairs for us…).
Let alone the restaurant: an old barn, with vault ceiling with old bricks showing, a huge fireplace with plenty of plants, then pots of fresh and dried flowers, then flowers and tools hanging on the walls… did I really had to add things to this?
So, for the flowers, we went to a local shop, part of a chain, where I got two rafia baskets (a little shabby) and in every baset we put two live plants of white hydrangeas. That’s all, presto! Fancy table.
Now those hydrangeas are decorating my mom’s and my brother-in-law’s garden. I love to know that “my” hydrangeas are still alive. It feels like a good omen and every time it’s a nice reminder.
Then my bouquet was of lily of the valley. Because I like their shape, the smell, in may they’re seasonal and I wanted to have the same flowers my grandma used.
A florist near my house told us it was oh so difficult to get, and oh so expensive. The guys over at the big shop just asked “How many?” 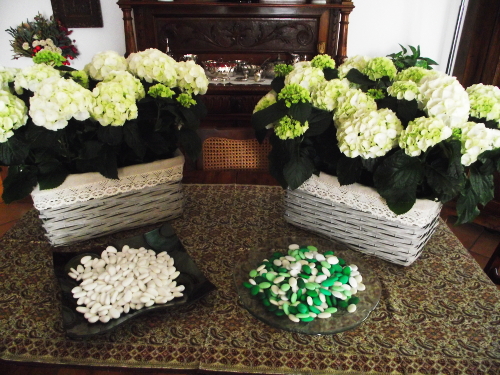 Centerpiece
Saint Ikea provided. Go to the flower section, take a square white ceramic plate, decorative pebbles, pillar candles in various shades of white and green. Put three candles in each plate, decorate with pebbles. Voilà.
Made them the afternoon before the wedding… I got many compliments and I think they were real because many guests took them home ^_^ (luckily, what would have I done with fourteen centrepieces???)
(Oh, and we printed also the menus, just a fancy cardboard and a .doc file 😉 ) 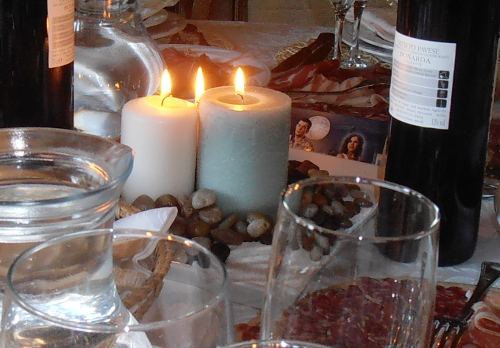 Table markers and tableau mariage
Our wedding didn’t have a “theme”, between me and you: I couldn’t care less for a “theme”.
But at some point you have to have your tables organized, people need to know were to sit.
And apparently playing the chairs game (the one where, when the music stops, people need to sit on the nearest chair and those who are left standing are out of the game) is not good for a wedding (lame!), so we just sat down (ah-ah…) and divided friends and relatives.
We were quite lucky, our tables basically made themselves.
Yet… I couldn’t stand numbers (maybe because I still was triggered by all the wool numbers I made for my brother’s wedding). So we decided to name the tables after our favourite TV shows (ok, this is what really happened: I went out with Marta and Valentina, I have to name them so they will feel publicly and rightfully thanked, and they said “Why don’t you use the names of the TV shows you watch?” “Well… Ehy, wait! That’s brilliant!” and so we did).
We watch plenty, it’s our favourite daily routine and we often have fun in recommending this or that to friends and family, or guess who of them would like this or that episode.
It was fun trying to match people to the tables and the TV series

Our guests appreciated!
All we had to do was downloading the official promo images, play with photoshop and print on photographic paper.
About our “tableau”, since everything was low key and bucolic, I had no troubles at all to use the two pinboards (from Ikea) I already had and pin the “pictures”.
We run a green ribbon and hung them to the door. 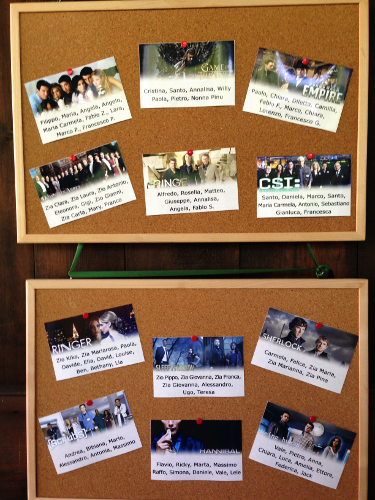 Rice
In this I’m my parent’s daughter.
Aka: they told me, for ages, that when they got married they didn’t want any rice throwing, it always felt like a waste of food. And I agree.
Then the municipality helped further: we couldn’t soil their spaces, so no rice, no confetti, no petals, no nothing.
I *adore* soap bubbles. So I asked, to those who would have liked to celebrate somehow after the function, to use those. You have no idea how pretty it turned out… well, actually, you do, picture: 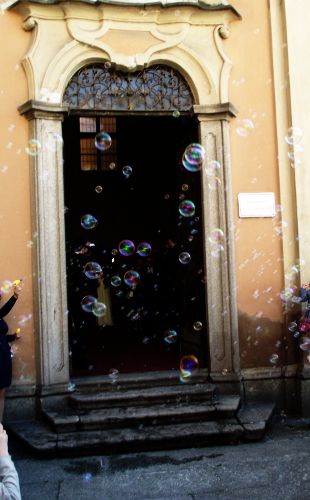 Hair and makeup
I made my own makeup. Let’s be honest here: to achieve that “barely there makeup” effect the only thing you have to do, in my opinion, is barely using any makeup. I can’t stand foundation, I always feel sticky (and mind me: I use mineral powder!). Plus, after “modeling” for a girl who was studying as a makeup artist (and the course was about corrective and bridal makeup) it does not matter how good your makeup artist is, makeup is going to show, plus they’ll charge you and ungodly amount of money for one of the easiest makeups on earth.
Why? Well, because to make you look like you have little makeup on, they will use little makeup on you! (Unless you want perfect contouring and a smoky eyes, but that’s not a “barely there makeup” anymore!).
Hair? I let it down, I never do, and they’re straight no matter what I do.
So why wake up way too early to have them straighten anyway… or worst, have my updo collapse in no time at all even before the wedding? Let me sleep, it’s better for me to be well rested than with a hairdo that feels nothing like me (and waking up too early requires, as a patch up, way too much makeup!).
I just dressed my hair with a thingy I made myself, but don’t worry, I’ll post a full tutorial! 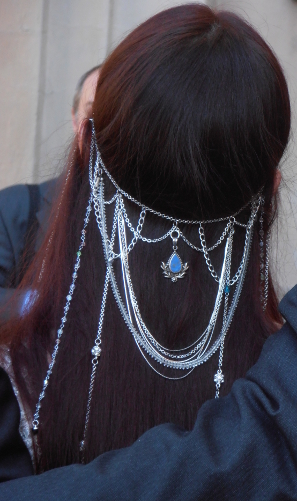 Music
I know I already posted about this, but I wanted to point out what was my entrance music: “Forbidden Friendship” from the OST of How To Train Your Dragon (I HAD to put some dragons in my wedding somehow, come on!)… well, I liked it before… now I like it even more!

(and after all… how cool is to close a post with this music???)

Basic manicure how to
Weight it off!
Musa’s box
My big fat spanish-italian wedding 5: dress huntin...