Lately I’ve seen a couple of pics on th web and I’ve also spoke with a friend about female characters in book.

Apparently writing good female characters, mostly for male writers, is hard to do.
I believe this happens because and when a writer wants to write a cliché instead of a character. 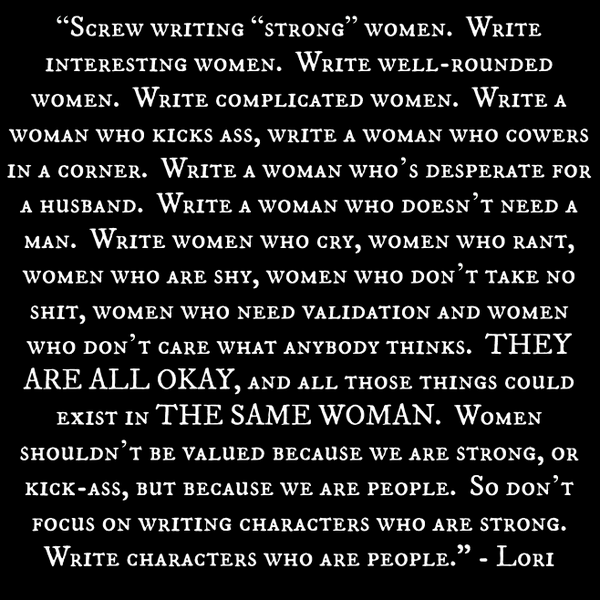 We could consider, for example, J. K. Rowling, who writes so many good female characters, all plausible, diversified, different and with whom you can relate, in the seven Harry Potter books, even though the main character is a boy.
“But she’s a woman!” you could argue.
True, but think of her male characters then, they’re still all different, diversified, yet plausible and relatable.
If for a man is difficult to write women, shouldn’t the opposite be as well?

The bottomline here is, to me, that people tend to focus to much on gender questions, what we think of/expect of a given gender.

I’ll give you another example with a male writer, Jasper Fforde, I’ve reviewed his “The Last Dragonslayer” and “The Song of the Quarkbeast” in my last “On the nightstand”.
What I’ve noticed, discussed with Sa and my friends, is that his heroine, the main character, with a predestination background and all as well, is a very well written female character, no clichés and she’s also likeable.
I, as a humble reader, have a theory on what’s the trick. Write a character (main or not) and decide if it’s a man or a woman only when you’re done. Take Jennifer Strange, she could have been Jonathan Strange and nothing would have changed. Not a single thing.
The same thing goes, I’m told, with Katniss Everdeen (from “The Hunger Games”), probably if she had been a Kevin Everdeen instead (if you do not count the fact that the name is quite lame and unrelated to the story in the book) probabilmente se si fosse chiamato Kevin Everdeen (a parte essere un nome più bruttino e meno legato alla storia e vabbeh) it would have been the same.

To sum up let me offer you this gifset, with the wise words of G.R.R. Martin (author of The Song of Ice and Fire, now know better as Game of Thrones).

And mind that his Daenerys is a Mary Sue in full right (a Mary Sue is a female character that has no other traits then being beautiful, loved by everyone and always right, kind of a flat character if you will… we all know by now the worst Mary Sue version, it’s Bella Swann from Twilight, but there are so many shades of grey (no pun intended) of Mary-Sue-isms, and Daenerys Targaryen, no matter how rad she is and how many dragons she has, is still a Mary Sue).
But Arya Stark, Ygritte and the others are remarkable 😉 (I’ve named just my two favourite ones, because some other female characters… well I just can’t stand them, but this doesn’t mean that they are not well written :P).

Mind me, I’m not saying that a good female character is solely and only the strong, rad, rebellious and independent type, this is the kind I like, but a well written female character can also be spoiled and whiny, a ninphomaniac with a penchant for patchwork, a grandma like the ones in the fairytales or the life-victim in stilettos, what matters is not falling into clichés of “she should behave like so and so”. Just like the first image explains.
So, yes, basically the trick is this: we’re all people.

Ok, I’m starting to see a pattern here, I just need a name that begins with the sound “gee” and, to make sure to nail it, one or even better two more names beginning with R.