I’ve recently learned how to knit, it’s not even ten days. To learn, in a beautiful and lazy afternoon with Giada and Stefy, I used old needles I had at home, maybe I stole them from my mother, and some really old wool, a blue roll that has been sitting in the sewing drawer for as long as I can remember.

And while I was knitting blue wool with a light blue sparly thread, as old as the wool, that I added to give my work some colour and life, singing the gayatri mantra and repeating mentally my other mantra “slip in, pass the trhead, exchange, slip out, in, pass, exchange, out”, I realized that I really like taking old dull things and make them useful or at least pretty. And I also like to let objects and things tell me stories.
I thought about a mermaid who gets out of water and goes downtown to have a drink, but outside the waves it’s cold, so what will she wear? They do not have Vanity Fair in the seabed. So she’ll wear whatever she can, as long as it is coloured and sparkly. Like this crooked water snake that was coming out of my knitting.

I jotted down this little story, then I re-wrote it for Figment. And now I’m here posting them both, not because they’re masterpieces, at all, but because if I managed to lear no knit then it means that anyone can (I’m also learning crochet! And one day I’ll also be able to knit socks, who knows :P) and also to give you an example of Figment’s really interesting exercises!

By the way I’m also experiencing the opposite: stories are inspiring me objects to create, it’s all Sholeh Zard’s fault, but you’ll hear more about this later on!
Now I’ll leave you with the picture of my mermaid noodle scarf and my really rough translation of my little story/figment exercise (a story told in a “hourglass” shape) 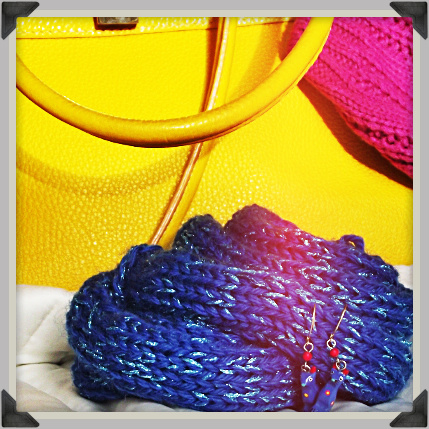 Maybe not everyone knows that sirens, during dark and moonless nights
decide to rise up from their salty and watery seabeds
just like their sweet water river sister do
why yes, there are river sirens too
and there are sirens in ponds
and some have jellyfish tentacles.
Anyway, I was saying
in moonless nights
all these creatures
the sirens
rise.
Where to?
They go dancing
take off the fishtail
like it was a skirt
they leave trails of broken hearts
and a very faint smell of seaweed
You tell them off by their bright clothes
and the cocktails they’re drinking: sex on the beach
or a long island with curaçao blue, which is disgusting
maybe, to you, you do not eat seaweeds all the time!

PS
True story, the other day I was at my grandma’s for lunch, she’s a great knitter with years and years for experience, I’m happy and hoping to make her proud when I tell her “Grandma, I’ve learned to knit!”
“Me too!”