I had already used this image about two monts ago, here, and it stuck with me. 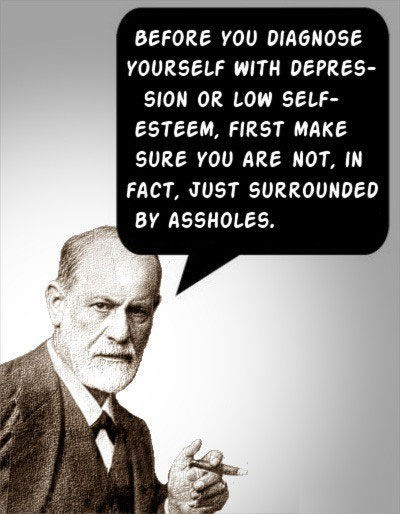 Let’s talk about it please, because I’m the kind of girl that always asks herself a gazillion questions and only in the end I let myself think that, for once, it might not be entirely my fault.

Well, I was that kind of girl.
A big life lesson I’ve learned these years is that, when something’s wrong, when something bothers you, is because Jung was right: if something about others bothers us we should ask ourselves if it’s because we see something we don’t like about ourselves in them, or because they have something we would like for ourselves.
I hope Carl Gustav will excuse me if I say that, even though he’s right, he always forgot to add the conclusion to this sentence: once you’ve asked yourself if you’re having a projection bias, and the answer was “no”, then chill, you’re not (the only) problem!

The best thing to learn, yet, in these circumstances is that, when you’re surrounded by assholes, it’s impossible to change the situation. Simply because no one will ever realize nor admit that they are such assholes.

But you can learn to observe, to spot them by far (maybe also before they annoy you) and to avoid them. How? Well, you just push the right button and you watch them jump.
Like when you mention something and people overreact. In these cases you know you hit the ground, you’re spot on, you stroke a nerve… say it as it pleases you, you’ve found an asshole and the topic he’s most sensitive about.
Please also realize you’ll never walk away with a “I’m right” (as previously said, they will never admit they’re assholes), but the consolation prize is that you where spot on, that you know which buttons to play to make them always jump like Pop Up Pirate

E.F.T.
Things I've learned while writing my thesis
21days n°1 - Affirmations
Pick up from the past
On my obscure past and introspective posts