I get a wonderful triangle of this sort of soft shortbread crust enclosing what feels like a mousse made out of chocolate and pears. Awesome.

The, at home, of course I start googling, ’cause my shortbread recipe is good, but it’s not so “soft”. I find a french pâte sablée, sounds good.

Then I find a recipe for a pie with pear and chocolate filling, judging from the picture the filling looks firm enough, like the one I tasted. 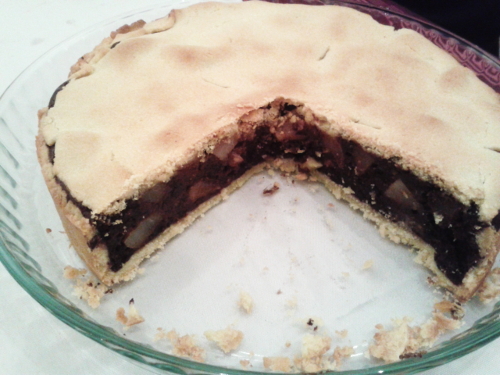 Here you can witness the golden crust in all its glory, the thickness of the crust itself, the firmness of the filling, the dents on the top and the insufficiency of the cover layer U_U Don’t worry, I’ll tell all in the recipe.

I combine the two things, it’s not a tarte, it’s not an actual pie, but calling it “Chocolate and poires pie” sounds cool enough… anyway call it whatever, as long as it’s good!
The only thing I’d change is the amount of filling, to better balance tastes, but this way is fine as well!

Ingredients for the pate sablée
250 g cake flour
125 g butter (fridge cold)
50 g confectioner sugar (which is mandatory for the success of the sandy texture, if you don’t have it you can also grind some regular sugar with a food processor)
1 egg yolk (fridge cold)
30 g cold water (about two tbsp, but go gradually and see how much your dough needs)
1 pinch of salt

Put the flour into a bowl with the cubed butter, work it at fingertips. The underlining rule for this dough: never heat it too much, don’t ask me why, but it works. Basically what you have to do is crumbling the butter into the flour, untill you have a sandy/wet consistency (a little bit like almond flour, you know?).
At this point add in the confectioner sugar and work it quickly.
Add the yolk, the water and a pinch of salt, worki it in, form the dough into a ball, wrap it up in film and store it in the fridge for about half an hour, the butter needs to firm up again.

Ingredients for the filling
250 g chocolate (dark, at least 50%)
80 g confectioner sugar
80 g dry biscuits (like petit sablées, but as long as they are cruncy and crumbly and tasteless, they’re fine)
30 g butter
3 whole eggs
2 pears (I had abate variety, the original recipe called for decana, either way I think is fine, mine turned out good; I’d just avoid williams, they tend to be too hard)

While the dough is firming up in the fridge, melt chocolate and butter over a double boiler.
Peel, clean and chop the pears into little cubes.
Whip the eggs with the sugar.

At this point it’s time to spread the dough.
I lined a cake tin (about 24cm diameter) that can be opened, by spreading some butter on the bottom and on the sides, then placed a disk of waxed (or parchment, whatever you have is fine) paper on the bottom and a strip of waxed paper on the sides (the butter sticks the paper to the tin): I really wanted to avoid wrinkles in the pie crust.

I worked the dough, between two sheets of waxed paper, with a rolling pin, this is because the original french recipe recommended using very little flour to spread the dough, otherwise it would turn too hard, and I really wanted to avoid that.
I rolled it pretty thin, less than half a cm, I cut out the disk for the bottom. With risks untold and hardships unnumbered I placed it in the tin, then added the border joining it really well with the bottom.
I had some dough left to cover the pie with.

At this point, when the chocolate is melted, remove it from the heat and add in, little by little and whisking well (we don’t want scrambled eggs) the egg and sugar mixture.
Then add in the crumbled biscuits (I used a food processor to grate them), these are needed to absorb excess moisture from the pears. The original recipe used amaretti, but I don’t like them so there you go with the alternative 😛
Then add the chopped pears.

Pour it into the pie crust (still raw, you don’t need to cook it first separately).
Roll the dough you have left and use it to cover your pie.

Part of the reason why I want to reduce the amount of filling is because I didn’t have much pie dough left, and the covering left some parts uncovered. You can decide you want to decorate this pie with strips of dough.
If you do cover it al up, make some dents into the pie dough to let steam escape.

Let it cool down completely before serving.
Well, I served it when it was still a little bit lukewarm in the centre, it was wonderful but a bit too soft in the middle.
You store it covered in the fridge, but take it out to “thaw” half an hour before serving, otherwise if it’s too cold the pie crust is too stiff and the chill kills off too many tastes.

Mythologically: ideas for the aftermath
Mythologically - A little corner
Christmas tree eco and low cost, a tutorial
Visionboard-wall how to
Roads apart