I’ve decided to start with nails, some because the topic is smaller (I was going to write easier, but I’m not that sure) and some because, in the end, there are only few products for nails: varnishes, solvents and maybe some specific moisturizer. Plus some tools.

But let’s not get ahead of ourselves.

As I’ve already stated in the opening post, it’s sooner a matter of words, that make the topic mysterious, like it’s a code for initiates… or simply a way to sound cool (plus, you have to know, in italian we use all sorts of foreing terms… adding up to the initiates-only-code…).
Though fear not! My ladies with a sad nail, truly yours Euforilla is here to save the day!

Let’s do some vocabulary:

nail bed: oh gosh, if you’re really into these boring technicalties just head over wikipedia
cuticule/s: that part of skin between the flesh of your finger and your nail
nuggets: my grandma’s word for those microcuts&whatnot around the nail (I’m so scientific, am I?)
base coat (ˈbeɪs ˈkoʊt): the first layer of varnish, usually nude or transparent. It makes the nail smooth, makes the colours grip better and protects the nail from pigment stains (mostly blue and green). Bonus if you choose a base that has “improving qualities” (like strenghtening bases, remineralizing bases, etc, or an almost ecofriendly -almost because there are no really ecofriendly polishes- base)
nail polish/nail varnish/venris à ongles: if I have to break down for you what this is… Anyway! It’s a polish/varnish you paint on your nails, in different colours, textures and finishes. There’s a lot of debate on brands and types, to each their own.

top coat (ˈtɑp ˈkoʊt): last layer of polish, usually transparent, fast drying and very shiny (as long as you’re not going for a matte or rock effect, but we’re getting there, we’re getting there…). It protects the colour, making it last longer.
french manicure: I don’t know why it’s called french, but it goes like this: you paint your “living” nail in a nude colour, while the grown part of the nail gets a white paint layer (to do it precisely some guides/stencils are used). Lately there are also coloured version of it 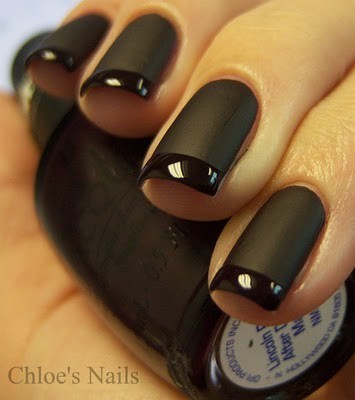 To go a bit more into details, I’ll give you some vocabulary about finishes/effects of different polishes/varnishes:

laqueur: the classic one, one solid colour, shiny. Some call it “cream”
glitter: usually more ore less tiny glitter, in a clear base or in a coloured base, always in tone with the glitter (which is a pain in the… to take off, but I’ll deal with that another time). 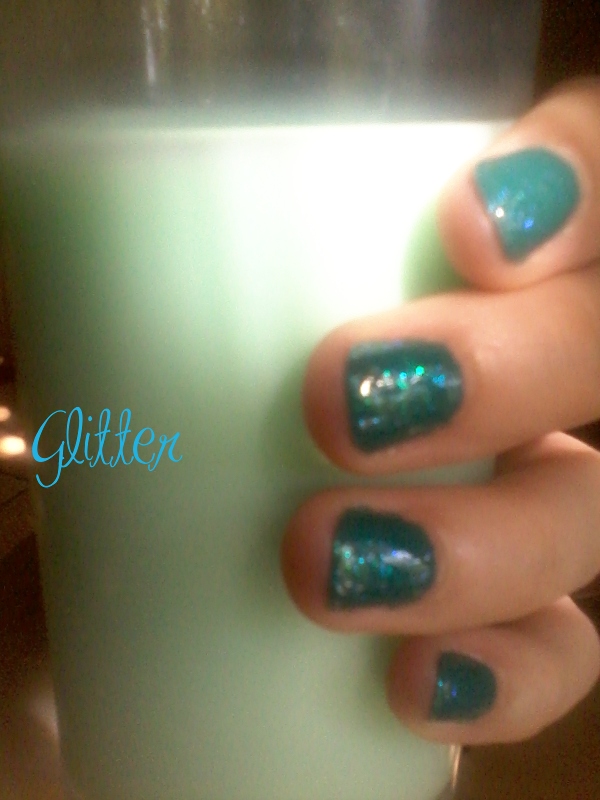 satin/shimmer/pearly: I think it says all on its oen, anyway it’s that colour that looks like it has microscopic glittering specks in it, of the same colour of course, that reflect and refract light in a softer way than a shiny finish.
matte: it’s quite recent in the history of nail polishes, some are matte from the start, some time you can just apply a matte topcoat that will matt-ify any colour you’re wearing underneath (like the black french manicure in the picture above or in my picture here below) 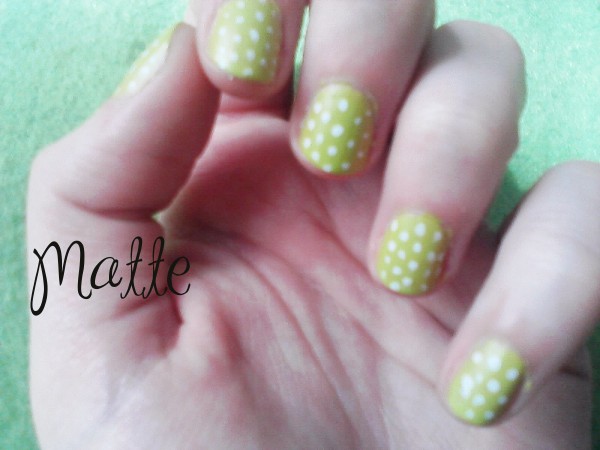 rock coat/craquelé: once it dries it “breaks” the polish, letting the colour you’re wearing underneath peek through (IE: I’m wearing a yellow base, I paint with a black rock layer, which breaks and shows the yellow creeks). There are transparent topcoats that give this effect on any colour. 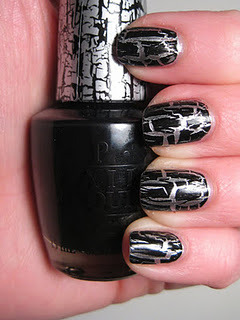 duochrome: as the word itself says, it’s a double colour finish, a polish that, depending on your nail angle, gives off a colour or another.

Some more vocabulary, now it’s the fun part, it’s about the various kinds of “nail art”, that I’ve personally tested (which makes them foolproof… except one that I haven’t tried personally):

nail art: generic for any kind of decoration that is not the classic nail polish, like the polka dot ones above… or actually any picture in this post… 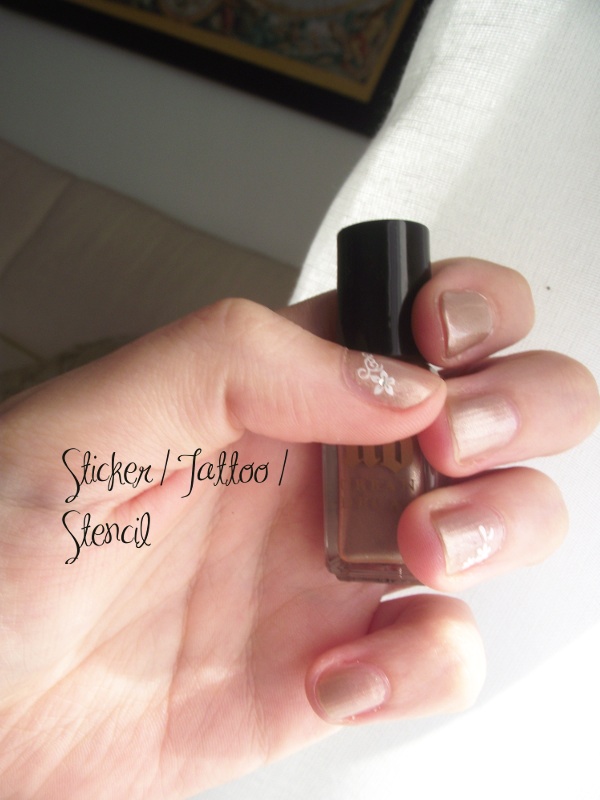 accent nail: it says it all, four fingers in one colour, the fifth in another (complementary, in contrast, glittered…) 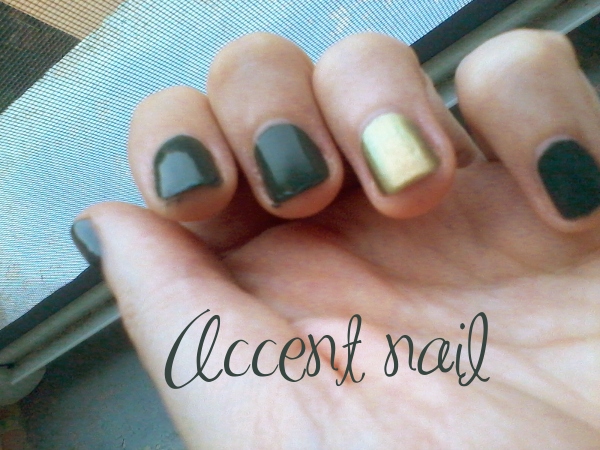 gradient nails: every finger wears a different shade of the same colour, from light to dark 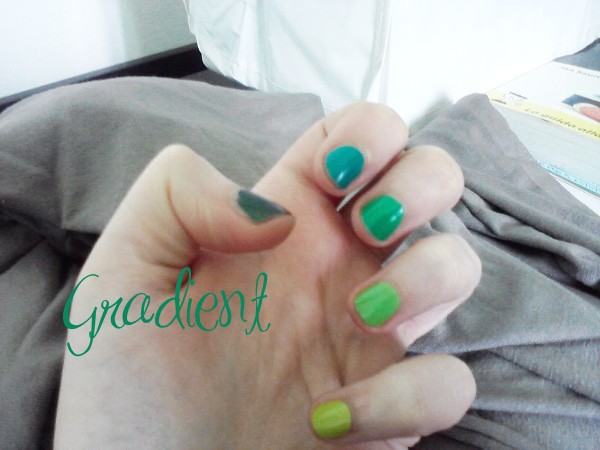 ombre nails: a shadowing/gradient of colour on one single nail 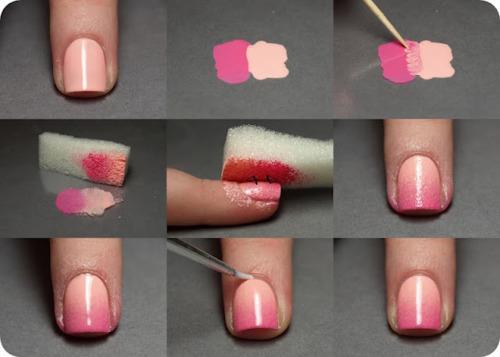 There are all sort of things you can apply to your nails: stickers, rhinestones (which come with their own glue), tattoos, stencils, dotting tools, magnets….

Of course you can’t do without scissors, bamboo stick, file, moisturizer. But on the basis of a base I’ll write next time

PS
Please be kind, my pictures aren’t professional nor perfect, also because I’ve took them randomly, any time I had a nail art I liked and thought “Why not? Let’s take a picture!”, I’ve googled only those nail arts I haven’t tried myself: the classic french manicure is not for me, but I might give a try to a coloured one, I don’t like the rock coat effect, and ombre nails look cool, I might try those too!